Feed Page for the month of February in the year 2016

Percy’s hands had clung to Jason’s shoulders the moment he came, but now, Jason could feel them falling away. One of them found its way down Jason’s chest, creeping down toward his groin. The hand traced over the ridges of his muscles, fingers splaying over his midriff. Finally, after what seemed to be an eternity, Jason felt Percy’s slender fingers wrap around the heavy girth of his cock.

“F-fuck,” Percy said, under his breath. A soft, adorable, nervous laugh bubbled from those lips. The tension that Jason had felt in Percy’s frame earlier melted away under his fingers as he massaged the boy’s shoulders. “I-I don’t think I’ve ever felt one this big before,” Percy whispered, in the darkness.

Jason brought one of his hands down Percy’s side, drawing his fingers teasingly over the supple skin of Percy’s pert butt. He reached around and stroked the curve of Percy’s still-hard dick with the pads of his fingers. “I don’t suppose you’ve had a lot of experience in that regard, then?” he said, teasingly.

All the sounds that Percy made while Jason teased him were simply adorable. That was what Jason had decided in the last half-minute. The low-pitched whines and the soft wanton moans that Percy thought Jason couldn’t hear were just endearing, and despite himself, Jason wanted more.

When he and Jason had been together, Luke had been sensitive and rather receptive, but even Luke’s whimpers couldn’t hold a candle to Percy’s. Jason couldn’t stop; he took full advantage. He helped himself to Percy’s body, sampling it, tasting every inch he could get his mouth on.

Jason honestly couldn’t tell when the explosions stopped, or if they had at all. He was too invested, too enchanted by the shivers that travelled up Percy’s frame whenever he spent a little bit too long rubbing the frenulum of Percy’s cock. “I don’t know if anyone’s told you this,” Jason whispered, when he felt hot tears splash against his shoulders, “but everything you do is sweet. Even this.”

Percy’s words gave Jason pause. His body was half-off, half-on the bed. The sheet had fallen just enough that his torso was bare to the elements, but it had pooled around his waist. It had also shifted so that from Jason’s point of view, he had a good view of Percy’s lithe musculature.

Jason had always preferred men younger than him, especially when they were slightly innocent. His dick twitched against his leg when he thought about how he delighted in the way that his more inexperienced partners often just let slip the word ‘daddy.’ He shivered.

Luke Castellan had been the one exception to that. He had loved hearing Luke say ‘daddy’ just as much, but he had looked forward to a life with Luke. The boy had been fifteen years younger than him—in the physical sense, at least. He had never really bothered to ask after Luke’s actual age, so enraptured in the young man’s charm as he was. Although, now that he knew Luke had been turned against him, he could only imagine that his ex-fiancé had been genuinely young.

Nico had to admit that Perseus was exceeding his expectations—barely, but exceeding them nonetheless.

By the time that Perseus had managed to fit three fingers into Nico’s hole, the prince was a mess. He was shaking so badly from want and need. He wanted to get fucked, period. Whether it was Perseus or someone else was irrelevant. Granted, he did find the curve of Perseus’ cock rather intriguing.

Regardless of Nico’s thoughts on whether it was appropriate to fuck one of the contenders for his tournament, he couldn’t help but melt into Perseus’ arms when he felt the blunt head of the knight’s cock at his hole. “Who would have thought that Aides’ son would be such a slut for cock?” said Percy, voice gravelly and low, just like Nico wanted it.

Percy looked at Nico. Guilt he’d been hiding for years twisted and turned in the pit of his stomach. It hadn’t gnawed at him this badly for so very long. “Me breaking up with Nico as soon as I did wasn’t an accident.” Percy leaned back again, tears stinging the corners of his eyes. “I didn’t have the courage to do it when I did, but I definitely had the motivation.”

Percy looked at Jason. He didn’t know why, but he did. Jason immediately looked at him, distressed. When Reyna held Jason back, Jason pulled his arm away and ignored her. He walked over to Percy and stood in front of him.

Percy could feel everyone looking at the two of them. “You might be fooling them,” Jason whispered, reaching down to take Percy’s good hand, “But you’re not fooling me. I know this is painful, and I want you to know that you don’t have to say anything more. You’ve already told us more than enough.” 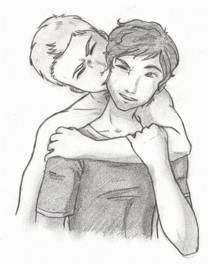